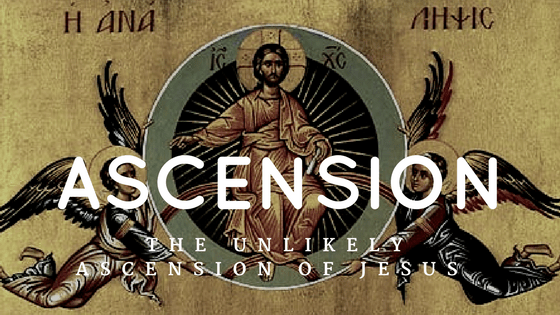 The Unlikely Ascension of Jesus

The Ascension of Jesus can be a confusing scene. It is to be counted among the high holy days of the church calendar. Events on the church calendar are limited to items of theological significance, which is why the nativity (Christmas), passion (Good Friday), and resurrection (Easter) of Christ are memorialized with such pomp. Yet the Ascension is easily the least understood of the great feast days. This is to the detriment of the modern church which desperately needs to recover the meaning of the Christ ascended on high.

Part of the problem is that the Biblical authors have offered limited descriptions of what actually happened at the Ascension. Our Scriptural references to the event are limited to a few quotations. One such description comes from St. Matthew’s Gospel following the words of the Great Commission.((The Holy Gospel of St. Matthew Ch. XXVIII:16-20)) Where Christ gathers his disciples at the mountain where he will presumably ascend. The Ascension in this account can only be inferred by its correlation with the descriptions offered by St. Luke in his Gospel and in the Book of Acts. St. Luke’s Gospel gives us a description of Jesus taking his disciples to Bethany, blessing them, and then, “He was parted from them and carried up into heaven.” ((The Holy Gospel of St. Luke Ch. XXIV:51)) Later in the first chapter of Acts, St. Luke describes the scene as Jesus boarding a cloud rising up through the sky. ((The Acts of the Holy Apostles Ch. I:9))

So that the general picture we get from the text is that the resurrected Christ gathers his disciples, gives them a sort of farewell speech, and then zephyrs his way into Heaven.

Why does it matter that Jesus ascended and why does the Church calendar mark this event as significant in the theological history of the Church?

Perhaps the Apostles were expected to understand the Ascension in the context of the Old Testament? How often is Christ compared to the Prophet Elijah, who himself was taken up into heaven by a chariot of fire? ((Fourth Book of Kings Ch. II)) But is this event similar the Ascension of Christ? Do the disciples of Christ rend their garments in grief and anguish as did Elisha? No.

Christ’s words seem to imply the reverse. Rather than separation, Christ teaches that his presence has penetrated the two planes of existence by the reality of the Incarnation and by the work of the Holy Spirit. Where Elijah was taken away from Earth, Jesus teaches that in the Ascension the Kingdom of Heaven is coming into contact with Earth in a way that is only comparable to how his own divinity took on human flesh.

Objecting to the Resurrection

In the context of the main message of Christianity– the Ascension is a problematic doctrine. For if we believe what St. Paul teaches about the significance of the resurrection: “if Christ is not risen, then our preaching is empty and your faith is also empty.” ((St. Paul’s First Epistle to the Corinthians XV:14 NKJV)) Then the ascension offers the first-century evangelist a bit of an apologetical hiccup. If Christ is ascended, how do they demonstrate the resurrection?

When the Apostles go to spread the news about the risen Jesus, what is going to be the first objection raised? “Where then is your resurrected Lord?” Would we not be in a situation similar to Joseph Smith and his golden tablets? ((Wikipedia: “[Joseph] Smith eventually obtained testimonies from eleven men, known as the Book of Mormon witnesses, who said they had seen the plates. After the translation was complete, Smith said he returned the plates to the angel Moroni. Therefore the plates cannot now be examined. Latter Day Saints believe the account of the golden plates as a matter of faith, while critics often assert that either Smith manufactured the plates himself or that the Book of Mormon witnesses based their testimony on visions rather than physical experience.)) The resurrection is given to the church as the most powerful testimony of God’s saving power while the Ascension seems to remove this immaculate evidence from their witness. How many objections could have been overcome by St. Peter pointing over to the bearded figure teaching from the steps of the temple. “That’s him right there. Jesus who died and rose again.” Why then does our narrative take Jesus away from us?

Perhaps it is because the main message of Christianity is not merely that Christ has risen, but rather that being risen, “he ascended into heaven, and is seated at the right hand of God the Father almighty…” ((The Apostles Creed))

It is the Ascension that properly encapsulates the meaning of the “Gospel.” As Mark Rushdoony has pointed out, “Our word gospel means more than just good news… The religious meaning of gospel was amplified by the imperial cult, which was the deification of the Roman emperor. This began with Julius Caesar and was firmly established in the reign of Augustus.” ((Rushdoony, M. R. (2014, November 16). What Gospel Do You Believe In?))

In the first century to proclaim the Gospel was to announce the good news that a new emperor had ascended unto the throne. For the disciples, the ascension was confirmation that Christ was truly the new King and had ascended to his heavenly throne. This is confirmed by the words of St. Stephen who testifies that he sees Jesus, “standing at the right hand of God.” ((The Acts of the Holy Apostles Ch. VII NKJV))

What then is the meaning of the Ascension?

As St. Peter proclaimed on the day of Pentecost:

This Jesus God has raised up, of which we are all witnesses.  Therefore being exalted to the right hand of God, and having received from the Father the promise of the Holy Spirit, He poured out this which you now see and hear.

“For David did not ascend into the heavens, but he says himself:

‘The Lord said to my Lord,
“Sit at My right hand,
Till I make Your enemies Your footstool.”’

“Therefore let all the house of Israel know assuredly that God has made this Jesus, whom you crucified, both Lord and Christ.” ((The Acts of the Holy Apostles Ch. II – NKJV))